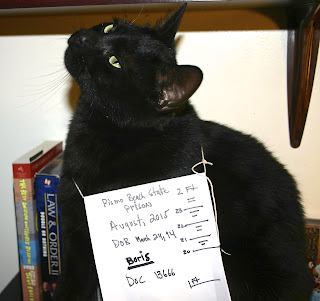 A notorious cat burglar was apprehended after escaping a prison cell in a rural seaside town in California.
Last night at approximately 6 p.m. Boris Tiberius Wilson, 1.5-years-old, used his shiv like claws to tear through the screen of his cell window shortly after consuming his evening meal of turkey in gravy with cheese bits and accented with real bacon.  Upon his escape he was reportedly seen loitering with suspected gang members in a driveway of a nearby home.
“It was an elaborate escape; I had no idea he
was gone,” said Warden Theresa-Marie Wilson. “In hindsight, I guess I should have sensed it. It was peaceful and quiet. It was like being on vacation.”
Special agent Whiskey Pickle Jones alerted authorities to the prison break from his post on the window perch in the north tower, commonly known as the reading nook. Whiskey steadfastly held his ground monitoring the movements of the escapee, a sworn enemy, through the small gaps between fence boards.
Boris was believed to be on the lam for a half an hour before the warden was able to understand Whiskey’s somewhat limited communication skills and initiate a search of the facility followed by sounding alert sirens and setting up an intense cathunt.
Investigators believe the escape had been planned for sometime because two other cats disguised as Boris, black fur, green eyes and sneaky demeanor, were spotted in the same driveway as the prisoner—an obvious decoy to confuse law enforcement.
Boris was taken into custody without incident and was said to be clinging to the warden during the trek back to his cell. The two unknown associates still lurking in the vicinity were said to chant, “Dead cat walking.”
Whiskey received several treat accommodations for his heroic efforts in providing information that lead to the capture of the escapee.
Boris will be dragged before the court yet again to hear his additional charges. He is already serving time for grand theft, felony destruction of property, stalking a human, and general annoyance. The warden will serve as both judge and jury in the case.