This is a public service announcement warning citizens across the world that your satellite TV service could be in jeopardy. One Boris Tiberius Wilson is wanted in connection with a string of stolen satellite dishes.
The suspect is described as 17 inches tall, with green eyes, black fur and a 12-inch tail.
Photographs taken by a witness, who, in fear for her life asked to remain anonymous, show the cat burglar brazenly casing rooftops, trailers and motor-homes in search of satellite dishes he can sell on the black-cat market to felines longing for more channels and HD choices. 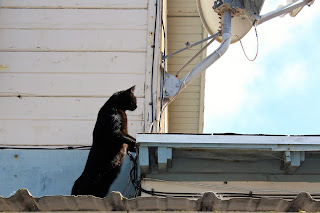 In the most recent incident Boris, AKA, Sneaky Pants, was seen at about 2:45 p.m. climbing a ladder to gain roof access on the 400 block of Whiskey Lane in Los Osos, CA.
Although his attempts to disable the satellite dish were thwarted by the home’s occupant, the fiery feline did exhibit his trademark  behavior to get what he wanted. Boris uses charm, common among psychopaths, such as head bumps, rolling on his back and tiny meows to lure victims into a state of complacency and trust.
Dish Network and Direct TV have joined law enforcement efforts to capture the thief who it is estimated could cause millions of dollars in damages.
On the other hand, the local cable company began yet another round of robo-calling customers to convince them to purchase a bundle deal no matter how many times the customers have begged them to stop calling.
Police have been in contact with the suspects estranged brother, Whiskey Pickle Jones, who expressed deep remorse for the life of crime Boris has chosen. Whiskey said he will report his brother to police if he sees him around the food bowl. Further, he will recommend severe, if not lifetime, sentencing to the judge based on Boris’ past behavior.
Police warn that Boris is small but crafty. They advise that if the suspect is spotted to avoid contact and to call 911 immediately.
Every Color Deserves a Forever Home
Follow Cat Noir CC at Facebook.com/catnoircc